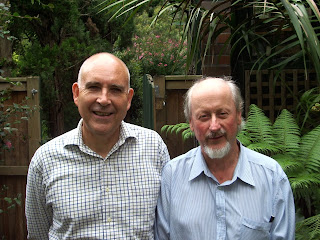 Dr. Terry Irving (left): Radical educationist and historian, Terry taught history and politics at the University of Sydney. He was one of the founders of the Free University (Sydney, 1967-1972), and a prominent New Left figure in the labour history movement. Continuing the tradition of radical history in Australia, but extending its scope, he writes about class analysis, youth politics, labour intellectuals, and radical democracy. His books include Class Structure in Australian History (with R. W. Connell, 1980, 1992), Childe and Australia: Archaeology, Politics and Ideas (edited with Peter Gathercole and Gregory Melleuish, 1995), Youth in Australia: Policy, Administration and Politics: A History Since World War 11, (with David Maunders and Geoffrey Sherington with assistance from Janet Sorby, 1995), The Southern Tree of Liberty (2006). He is currently Visiting Professorial Fellow at the University of Wollongong. For a more detailed listing of Terry's writings, click here.

Rowan Cahill (right) was prominent in the anti-war, student, and New Left movements during the 1960s and early 1970s. He was also one of the founders of the Free University. Rowan has worked as a teacher, freelance writer, agricultural labourer, and for the trade union movement as a journalist, historian, and rank and file activist. Currently a part-time teaching academic at the University of Wollongong, and an Honorary Fellow with the university's Faculty of Law, Humanities and the Arts, he has published extensively in labour movement, radical, and academic publications. His books include The Seamen’s Union of Australia, 1872-1972: A History (with Brian Fitzpatrick, 1981), Twentieth Century Australia: Conflict and Consensus (with David Stewart, 1987), A Turbulent Decade: Social Protest Movements and the Labour Movement, 1965-1975 (edited with Beverley Symons, 2005). For a more detailed listing  of Rowan's writings, click here.

Rowan [left, addressing a National Conference of the Maritime Union of Australia] successfully completed a doctoral dissertation on Australian left journalist and historian Rupert Lockwood (1908 -1997) in 2013. He is currently working on an autobiographical account of growing up in  and becoming a leftist during the period 1945-1972, titled Crucible Years: Reflections of a Cold War Kid.

Terry [right] is writing a book about the rewards and disappointments of everyday political life on the revolutionary left in the first half of the twentieth century seen through four connected lives: an American feminist agitator who spent eight years in Australia (Jennie Scott Griffiths), a political theorist turned Labor government advisor who became an eminent pre-historian in Britain (Gordon Childe), and two minor players in the Australian Communist movement who had significant post-Communist lives, one as an adult educator (Esmonde Higgins), the other as a teacher/historian (Jim Rawling). The book illuminates a moment of radical democracy whose earlier history he explored in The Southern Tree of Liberty (Federation Press, 2006). When not writing he pretends to be a guerrilla gardener.